This page will provide you with a bit of background on prior photo exhibits and contests that featured extraordinary birds in the extended local area. In the past we have teamed up with Hunt’s Photo, as well as local conservation groups like Mass Audubon Blue Hills Trailside Museum and the Mystic River Watershed Association. Hunt’s has arranged for online auctions to help raise money through the sale of these matted and framed photographs for the benefit of the conservation groups, and done so with great success. These photo exhibits have attracted a lot of attention and interest from a wide range of people: bird and nature lovers, conservationists, and photography aficionados. The recent Bald Eagle exhibit, the Peregrine Falcon exhibit, and the 2019 Winter Crow Roost exhibit have all been featured stories in the Boston Globe and the Eagle Tribune. We hope you will join us for the opening reception for the 2020 Celebrating the Winter Crow Roost exhibit, and consider bringing your friends! 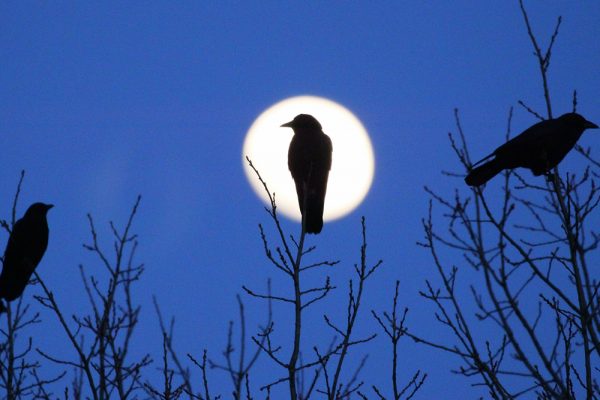 The Essex Art Center in Lawrence, MA is pleased to present exhibitions and programs built around the theme of American Crows and Fish Crows. In cultures around the world, myths have grown up around crows. They are portrayed as tricksters, omens, or bringers of light. For centuries crows have captured the attention of artists. Ancient Arabs illustrated manuscripts with paintings of crows. Naturalists like John James Audubon created realistic images. Van Gogh is famous for his painting “Wheat Fields with Crows.” Like artists and storytellers throughout time, we hope you come to be fascinated by these amazing birds!
American Crows are social, family oriented, smart, clever, and very resourceful. In a number of cities and towns from coast to coast, you’ll find them during the winter months gathering in large communal overnight roosts. Here in Lawrence along the Merrimack River, the Crows begin to roost in October and continue through early April when they return to their breeding grounds.

During the winter of 2018, their numbers swelled with arrival of migrants from the north as well as locals from nearby breeding grounds. The winter roost at its peak in the middle of January included over 15,000 American Crows, along with a much smaller number of Fish Crows. These exhibitions celebrate this amazing, natural phenomenon!

This exhibit portrays the crows as they stream into multiple staging, or gathering, locations in late afternoon, and then as they swirl around and land in a final roost location, to settle in overnight. It is an amazing sight to see!

In the Elizabeth A Beland Gallery: Murders and Other Flying Things Video and still images by Dennis Hlynsky. There was a time once in England when it was fashionable to coin words for groups of animals based on their qualities, whether perceived or real. For crows in flight the word “murder” seemed appropriate. To be allowed proximity to a large flock of crows is a fearsome thing. As the sunlight fades; the language of the crows fills the air. In twilight, our human vision begins to fail. The birds bounce heavily on tree branches and take to wing. They glide in large arcs. There, in the penumbra of the sinking sun, our minds wander to seal up the perceptual gaps. We make up stories. We make sense of the mysterious. We are witness to an incomprehensible event. A murder is in the air. The spirits of the night awake to remind us of our mortality. A heightened awareness consumes the night. Dennis Hlynsky is a Providence, RI-based artist and designer. He teaches at Rhode Island School of Design.

Lawrence has an art show to crow about
By Annika Hom, Boston Globe, January 16, 2019 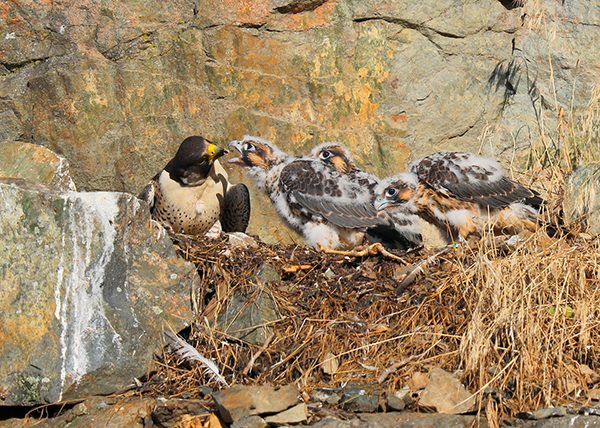 MELROSE, MA, October 2018—Many well-known local bird photographers participating in the 2018 Peregrine Falcon Photo Exhibit and Contest hosted by Hunt’s Photo and Video in Melrose. The exhibit and contest will showcase 17 photographers whose work will be exhibited throughout November. Three winners and three honorable mentions will be chosen from the group and announced at the opening reception this Sunday. In December, the exhibit will move to Mass Audubon Blue Hills Trailside Museum, where it will remain through February.

The purpose of the exhibit, which begins with an opening reception at Hunt’s Photo, Sunday, November 4, is to highlight the successful conservation story of the Peregrine Falcon in Massachusetts. Although previously listed as an endangered species at the federal level, peregrines are now only listed as threatened at the state level, and MassWildlife is in the process of upgrading their status. According to state wildlife officials, this demonstrates the effectiveness of the national, regional, state and local efforts to protect the bird.
Family, friends, conservation-group members, bird clubs and the general public are welcome to attend the opening reception, 2:00–4:00 p.m., Sunday, November 4, at Hunt’s Photo, 100 Main St., Melrose, 02176. The guest speaker will be Tom French, assistant director of Massachusetts Division of Fisheries and Wildlife for Natural Heritage & Endangered Species Program. Norman Smith, director of Mass Audubon Blue Hills Trailside Museum, will be bringing a live peregrine to the reception. Since 1987, Smith and French have been banding the peregrine-falcon chicks in the clock tower of the Marriott Custom House in Boston, which provides researchers valuable information about the behavior of these birds. Also at the event will be Ray Brown, radio host of Talkin’ Birds, which can be found on WROL 950 AM Boston or online.

A panel of three contest judges who have considerable experience in bird photography will select winners from the group of 20 finalist photos. The criteria for winning include originality, technical excellence, composition, overall impact and artistic merit. The judges are:

The three top winners will be awarded Hunt’s Photo gift cards. Honorable mentions will receive a signed copy of The Peregrine Returns, written by Mary Hennen and illustrated by Peggy MacNamara. The books have been donated by the Chicago Peregrine Program.

Additionally, Hunt’s Photo is creating an online auction of all the photographs, which will be matted and framed. Proceeds from the online auction will benefit Mass Audubon Blue Hills Trailside Museum. To bid, visit https://www.biddingforgood.com/Huntsphoto/falcons.

Many organizations with an interest in raising awareness of birds and wildlife conservation have signed on as Community Partners of the project. They include: 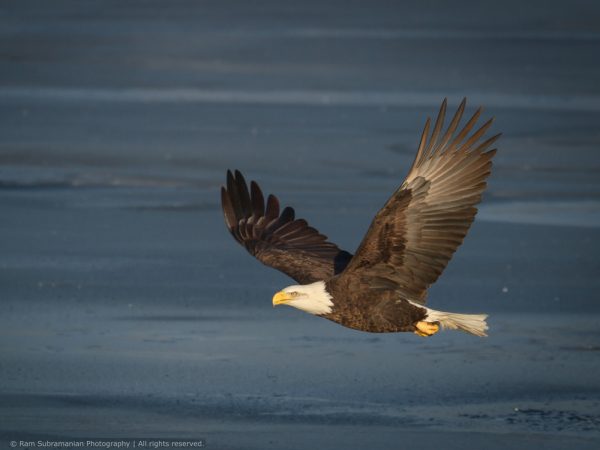 Celebrating the Bald Eagle in the Mystic River Watershed

By 1905 hunting and habitat destruction had decimated the Massachusetts Bald Eagle population. Nationally, the use of DDT, a dangerous chemical insecticide introduced in the mid-20th century, caused the Bald Eagle population to decline dramatically. This chronic and exponential population loss led to our national bird arriving on the federally Endangered species list in 1967!

Valiant efforts to ban DDT and an elaborate plan to relocate forty-one Bald Eagles from Michigan and Canada to the Quabbin Reservoir in 1982 resulted in astonishing, steady population growth. Thanks to the successful relocation, and major efforts to protect and restore habitat, you can once again find this majestic bird perched in tall roost trees or gliding gracefully along the Mystic Lakes! While we celebrate one of the greatest conservation success stories of our time, our local photographers are skillfully documenting this remarkable homecoming.

On Sunday, March 25th from 3:00-5:00pm, Hunt’s Photo and Video will host a free, public reception for their Bald Eagle Exhibit, a gallery featuring 20 breathtaking Bald Eagle photographs captured by local photographers. Marj Rines and Paul Roberts, local bird experts, will share remarks on the history of Bald Eagles in and around the Mystic Lakes and the extended watershed. Three winning photographs will be announced.

Marj Rines, of the Menotomy Bird Club, spoke to this new phenomenon saying, “twenty years ago I still hadn’t seen a Bald Eagle on the Mystic Lakes. Around that time, my aunt who lived in Winchester called to say she had seen an eagle. I was so jealous and spent a lot of time that winter searching until I finally saw one. I was terribly excited! Since then, it has become far more routine to see them. Some winters you can see 2-3 perched in trees or on ice at the same time.” The Menotomy Bird Club has it’s origins in the early Bald Eagle appearances- local birders would often run into each other on the Mystic Lakes searching for the eagles and built a community around these experiences.

From March 1st- March 31st Hunt’s Photo and Video will also hold an online auction featuring the Bald Eagle images in the gallery. Visit the auction website (listed below) to place bids on these beautiful signed and framed photographs. Proceeds from the auction will benefit Mystic River Watershed Association, the Arlington-based environmental advocacy organization working to protect and restore the Mystic River, its tributaries, and watershed lands.

Mystic River Watershed Association is thrilled to benefit from this auction and celebrate the natural history of the Mystic River with Hunt’s Photo and Video.

Check out https://www.biddingforgood.com/Huntsphoto/baldeagle to view and bid on the images. 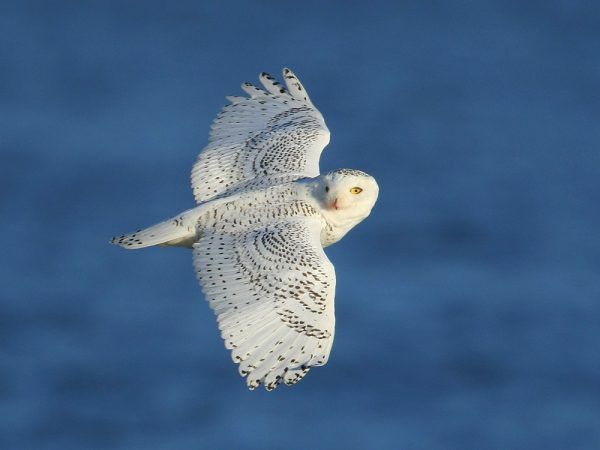 On Saturday, Nov. 1, from 5-7 pm, Hunt’s Photo & Video of Melrose will host a free opening reception for its first Snowy Owl Exhibit, a gallery show of breathtaking wildlife photographs taken during the snowy owl irruption of 2013-14. The event is open to the public.

The exhibit will feature photographs culled from the widely watched Snowy Owl YouTube video produced by renowned bird photographer Craig Gibson of Winchester and will include images of snowy owls soaring, hunting, diving, and perching in areas as diverse as Cape Cod beaches, urban landscapes and Logan Airport runways.

Photographers from across the state will be represented in the show, including local photographers such as Shawn Carey, John Harrison, and Eduardo del Solar. In addition, Ray Brown, host of Talkin’ Birds Radio Show on WROL, Boston, WCAP, Lowell, and WATD, South Shore, Massachusetts, will be a featured guest, along with guest judge Wayne R. Petersen, director of Mass Audubon’s Important Bird Area (IBA) Program. Refreshments from Organic Ocean Sushi in Melrose will be served.

The exhibit will remain on display throughout the month, including during the upcoming 38th annual Hunt’s Photo and Video Show on Nov. 7-9.

Adding to the excitement will be an online auction of the exhibit photos from Nov. 1-20. Visit the auction website to place your bids on these beautiful signed and framed, 16″x20″ images. Proceeds from the auction will benefit the Snowy Owl Project of Mass Audubon, which works to band, track and protect snowy owls.

Hunt’s Photo President Scott Farber says the snowy owl exhibit is a natural extension of the company’s growing relationship with the North American Nature Photography Association (NANPA). A longtime supporter of the organization, Hunt’s has partnered with NANPA and the Parker River National Wildlife Refuge in co-sponsoring photo weekends and tours of wildlife habitats on Plum Island.

“The Snowy Owl Exhibit is a chance for anyone who loves photography or wildlife or both to be amazed and inspired by this impressive collection of wildlife photographs,” Farber said. “We are proud to showcase and support the work of these talented photographers and Mass Audubon’s Snowy Owl Project at Hunt’s.”

“It was an intensely interesting experience, this observation of crows returning to the overnight roost.”

“The flight lanes may radiate from the winter roost in all directions: crows use the same flight lanes and feeding area day after day.”